Address by Correa at the Seventh Summit of the Americas
Panama City, Panama
April 12, 2015 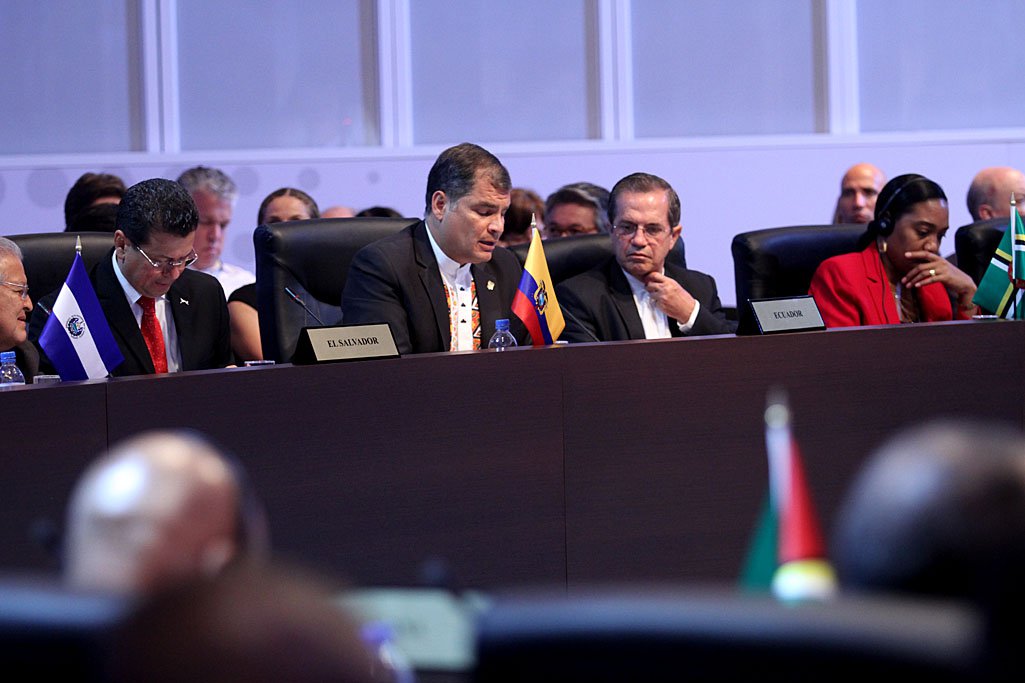 Dear Heads of State and Government of the Americas:


A fraternal greeting and sincere thanks to the President of Panama, Juan Carlos Varela, to his partners and the people of this beautiful country from the waist of Our America, for the warm welcome that they have provided us.

I wish to send greetings the new Secretary General of the OAS, Luis de Almagro, recently elected at the meeting of the General Assembly of Washington, who has before him a difficult but unavoidable challenge: radically transform that institution.

We have sent a greeting of solidarity to the people of Chile and their President, Michelle Bachelet, who has borne with courage the harmful effects of the recent floods in that country.

All our support to President Santos and his unwavering political will to continue on the path toward lasting peace in Colombia.

But peace is not merely the absence of war. The insulting opulence of the few in Latin America, next to the more intolerable poverty, are also daily bullets against human dignity.

Therefore, I think that the motto of the Summit instead of “Prosperity with equity” should be “Equity, for Prosperity”

CUBA
Today we are witnessing an historic event. In an unprecedented triumph of dignity, sovereignty and solidarity among peoples, we are welcoming the sister Republic of Cuba as a full-fledged member of this forum, from which she never should have been excluded.  However, our joy is not complete. There still must be eliminated the inhuman and illegal blockade against Cuba.  Also pending is the return to Cuba of the occupied territory of Guantanamo.

During the cold war, the bloodiest dictatorships in the region were upheld, without regard for freedom of the press, human rights, or democracy itself. We need only recall, for example, that the 1976 OAS Assembly held in Santiago de Chile was chaired by the chancellor of Augusto Pinochet.

The invasive and interventionist action during those years was based in the fight against communism.  Now the argument is “the defense of Human Rights”.

President Obama’s executive order against Venezuela flagrantly violates international law and particularly section (e) of article 3 of the charter of the OAS.

The region’s response has been strong, rejecting the Executive Order and calling for its withdrawal. Our peoples never again will accept guardianship, interference or intervention. Their memory is wounded by the abuse and the violence of the past. Panama is a good example of this, with the invasion in December 1989 that caused thousands of deaths, to remove the bloody dictator that the same invaders had supported.

However, they continue illegal interventionism. A few weeks ago, officials from the Department of State requested funds from the Congress of the United States for, I quote, “support for freedom of the press, human rights and democracy in the Hemisphere, including Cuba, Venezuela, Ecuador and Nicaragua”.

Let’s talk about human rights.
According to ECLAC, in the period 2007-2013, Ecuador is one of three Latin American countries that has reduced inequality the most. During our government, from the historic poverty reduction by 12.5 points, only 5.4 points are by growth effect, and 7.1 are by redistribution effect.

In Ecuador we do not have torture, death penalty or extra judicial executions. With the judicial reform approved by citizens in popular consultation on 2011, the judges are selected by public competition organized by merit, autonomous from the Executive.

Reforms
The reality is that we need not only a new system of human rights, but a new inter-American system. We must understand that the Americas on the north and south of the Rio Bravo are different, and we must talk as blocks.

The Organization of American States (OAS) has historically been captured by interests and visions of North America, and their accumulated biases and atavism are inefficient and unreliable for the new times in which we are living in Latin America and the Caribbean.

An example was the Falklands war, which shattered the Inter-American Treaty of Reciprocal Assistance, the Rio Treaty, causing OAS to disappear. Our embrace of solidarity to the Argentine people and their struggle for the Malvinas, blatant example of colonialism in the twenty-first century.

Other examples are the absurd exclusion of Cuba from the OAS for decades, and the criminal blockade against Cuba.

We understand very well that the above is difficult to achieve, because of vested interests.  So it is perhaps time to have a Latin American system of human rights. Everything is ready, because basically we countries of Latin America that have ratified the Pact of San Jose are the only ones that recognize and submit to the Inter-American Court.

And let’s talk about democracy.
Thomas Jefferson, one of the founding fathers of the United States, is the principal author of one of the most beautiful documents in the history of humanity, the Declaration of Independence that, in its second paragraph, states: “All men are created equal, they are endowed by their Creator with certain inalienable rights, among these are life, liberty and the pursuit of happiness”.

Wonderful words, but the same Jefferson was owner of hundreds of slaves. At that time, it was unimaginable that black people had rights, even for these extraordinary men.  Almost a century had to pass after the Declaration of Independence for the elimination of slavery, and exactly a century more for the abolition of racial segregation.

Today, Latin American elites are still unable to understand that fundamental rights are for everyone.  When these elites denounce the lack of respect for their human rights, it is because for the first time they are equal under the rule of law. When they denounce dictatorships and authoritarian rule, it is because they can no longer submit our governments to their whims and interests.

And let’s talk about freedom of the press.
When Latin American elites argue that there is no freedom of press, it is because their media no longer have impunity to manipulate the truth, or because we dare to reply, to contest its hegemony in order to expose their lies.

One might wonder if a society can be called truly free when the right to information and to own social communication is in the hands of private business for profit. And although this is a global issue, the problem is especially serious in Latin America, given the media monopolies, their family property, their serious ethical and professional shortcomings, and their blatant involvement in politics.

I think we all agree that a good press is vital to a true democracy, but we must also agree that a bad press is fatal for democracy itself… and the Latin American press is bad, very bad!

DIVISION.
Now we are accused of dividing our countries. Just imagine, what a coincidence. The same thing they said to Abraham Lincoln, considered the best US president in history. They called him a “tyrant”, “despot”, “fanatic”, and “crazy” for his noble struggle for the abolition of slavery. It caused a civil war, that in the event of defeat would have generated the division of the country, and Lincoln would probably have gone down in history as a criminal. Read what was said by slave media of the time. Let’s learn something about history.

With the discovery of the new continent, North America and Latin America began their histories at virtually the same time. Have you ever wondered why Latin America is not the United States, the most powerful country on the planet, and vice versa? This is one of the great enigmas of development. The answers are multiple and complex, but no doubt, one of the factors is the elite class that dominated and still dominate our America.

Hopefully, President Obama, you understand that, in order to defend your interests or due to bad information, you support these elites that have harmed us so.

“All men are created equal, they are endowed by their Creator with certain inalienable rights, and among these are life, liberty and the pursuit of happiness”.

In Ecuador and throughout Latin America, we also maintain these principles and we will make it a reality at any cost, not only for the elites or at some future time, but now… and for all!

Prosperity with equity? I would say: equity for prosperity, but also for sovereignty and dignity. The time has come for the second and final independence for our America.